Back to Creative Coaching home page 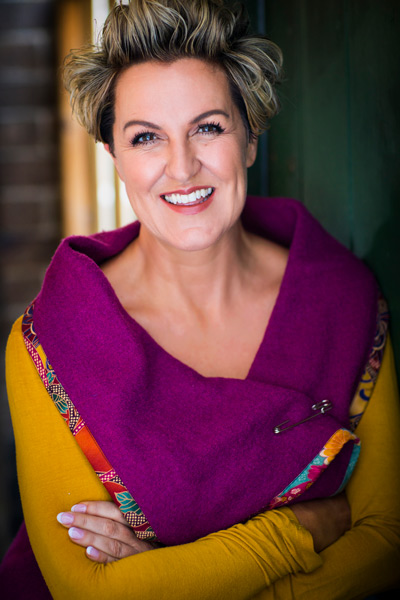 Queenie van de Zandt is one of Australia’s leading ladies of musical theatre and cabaret and considered Australia's leading teacher of audition technique for musical theatre, song performance and cabaret. Well known for her incredible versatility as a performer she has worked extensively in musical theatre, plays, cabaret, on television and film, and as a recording artist, comedienne and writer.

Queenie’s work on television includes: Five Bedrooms, Very Small Business; Winners & Losers, City Homicide, Da Kath & Kim Code; Let Loose Live; All Saints;  and in theatre she has worked for companies throughout Australia including STC, QTC, The Ensemble, La Boite and the Malthouse, in plays such as: Women of Troy; Face to Face; Rabbit Hole; Absent Friends; Abigail’s Party; A Midsummer Night’s Dream; Barmaids; Caucasian Chalk Circle; Secret Bridesmaids' Business; The Vagina Monologues; The Road to the She-Devil’s Salon; Furious; and Speaking in Tongues.  Queenie has also had roles in the films: Scooby Doo - The Movie, Salem’s Lot, and played the leading role of Margo in the Aussie feature film Girl Clock.

However, Queenie is still probably best known for her extensive work in musical theatre and cabaret. Queenie has played leading roles in hit musicals such as: Next to Normal, Thoroughly Modern Millie, We Will Rock You, Funny Girl, Into the Woods, King Kong, Smoke & Mirrors, Oliver!, The Full Monty, Anything Goes, Cabaret, The Boy from Oz, Eureka – The Musical, I Love You, You’re Perfect, Now Change, Hair, and Follies. In her early career she also performed in such classic musicals as Les Misérables and The Threepenny Opera.

As a writer, Queenie has co-written two albums of original music: Amazon Woman and Other Stories and her subsequent one-woman cabaret show, Amazon Woman and Other Stories, performed at music and cabaret festivals and music venues all over Australia. Her two other critically acclaimed and award nominated cabaret shows, CABARET - In 12 Easy Steps and The Best (and Worst) of Queenie van de Zandt have toured to every major cabaret festival in Australia. In 2014 Queenie released Queenie van de Zandt - Live in Cabaret - a live recording of one of her cabaret performances and in 2017 Queenie performed her new show, BLUE: The Songs of Joni Mitchell, to sold-out houses in Brisbane, Sydney and Melbourne. The show was subsequently nominated for the Sydney Theatre Award, the Helpmann Award and won the Glug Award for Best Cabaret and two Broadway World – Sydney Awards for Best Cabaret and Best Cabaret Performer. The show was set to tour the USA in 2020 until COVID forced Queenie to cancel the tour 4 days before getting on the plane. The show is set to continue to tour in 2021 and a US Tour is planned for 2022.

Queenie's alter-ego, Jan van de Stool, the madcap International Musical Therapist gathered a national cult following, when she appeared on Australia's Got Talent in early 2016. Her one-woman show I GET THE MUSIC IN YOU an evening with Jan van de Stool which she co-wrote with Tony Taylor, performed to packed houses in Melbourne, Canberra, Brisbane and Adelaide and in 2006 played to sold-out houses and great critical acclaim for an extended season at the Ensemble Theatre in Sydney. The show was nominated for both the Green Room Awards and the Sydney Theatre Awards and toured twice to the Melbourne International Comedy Festival. Jan van de Stool has been seen by over 1 million Australians through her shows, her work in corporate theatre and her online presence on YouTube and social media. She is now regularly asked to host high profile charity concerts and award shows, such as the 2016 and 2017 Helpmann Awards, which were televised on Foxtel and ABC TV. Queenie continues to work with her co-writer Peter J. Casey, on pitching TV shows based on this character, as well as continuing her live performances with Jan’s new theatre show – PARTING THE RED CURTAINS – which toured to the Brisbane and Sydney Comedy Festivals in 2019.

Alongside her performance work, since 2000, Queenie has presented her master classes, workshops and courses in cabaret, song performance and audition technique for musical theatre around the country. She is writing a book about audition technique and in 2020 released a CD, with fellow vocal educator Beth Daly, called Singing & Vocal Warm Up Exercises – From Beginner to Professional. She has held teaching positions in numerous performing arts schools, has been invited to conduct master classes and seminars throughout Australia and has written musical theatre courses for several leading institutions. She has taught in the music department at NIDA and has held teaching positions in the music theatre courses at VCA and Federation University in Ballarat (formerly BAAPA).

In 2015 Queenie co-founded The Australian Musical Theatre Academy (AMTA). AMTA offers workshops, masterclasses and courses for students of all skill levels, giving people the tools to live creative, passionate and fulfilling lives, working with the best instructors in Australia.

" Working with Queenie inspired me to completely overhaul my audition mindset, how I was approaching my craft and reawakened my connection with and love for my work. And it made auditioning fun again! Straight off the back of studying with Queenie I was lucky enough to gain entry into the Victorian College of the Arts to further my Music Theatre studies and on graduating toured nationally with Kinky Boots."
J. Little

Submit Your Application for Creative Coaching

Back to Creative Coaching home page