Part of our commitment at AMTA, is that we only work with the best instructors in Australia. Our tutors are the people who create and/or perform in Australia’s most prominent commercial musicals. There are 4 tutors in each workshop: a core tutor/director, musical director, choreographer, and a staff helper. As staff are confirmed they will be uploaded onto this page. 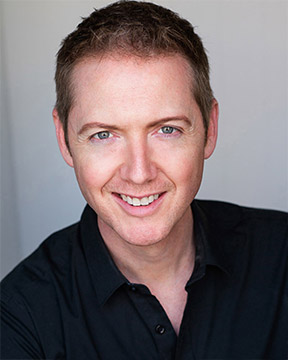 Pre-covid, Jason opened The Boy From Oz at Melbourne’s State Theatre for The Production Company, lectured at NIDA, directed an Australian tour of Bosom Buddies starring Nancye Hayes and Todd McKenney, a production of the D.C. Moore play Honest, and the Sydney Theatre Award winning production of Hayes At The Hayes.

In recent years Jason has directed; Brigadoon for The Production Company (Green Room Award nomination), Dusty at the Playhouse Theatre - Melbourne and Adelaide Festival Theatre, Bernstein’s Wonderful Town and Jingle Bell Jazz at the Sydney Opera House, Loving Repeating – for which he received the 2016 Green Room Award, the play Here Lies Henry in London, four new Australian works – Between Worlds, Almost Home, Say Hello First and Playing Rock Hudson, the World premiere and National tour of Breast Wishes, the plays As You Like It, The Double Bass and Mr. Burns - A Post-Electric Play, Elegies at The Sydney Theatre, Take Two for Christine Dunstan Productions, The 25th Annual Premier’s Christmas Concert at the Sydney Entertainment Centre starring Georgie Parker, Rachael Beck and Collette Mann, Flora The Red Menace, The Mystery Of Edwin Drood and The Hello Girls for VCA, Yesterday An Incident Occurred, The Skriker, The Rimers Of Eldritch and Chekhov In Hell for AIM Dramatic Arts and for WAAPA; Carousel, 42nd Street, Legally Blonde, Merrily We Roll Along, Batboy, Once On This Island, A Chorus Line, How To Succeed In Business Without Really Trying and Noel Coward’s Easy Virtue.

Jason’s most recent acting credits include Mothers And Sons (Ensemble Theatre), Under Ice (SBW Stables Theatre), Lady Macbeth Of Mtsensk (Belvoir) and No Way To Treat A Lady (Darlinghurst Theatre Co). He also played Brave Sir Robin in the Australian premiere of Monty Python’s Spamalot at Her Majesty’s Theatre, Melbourne. 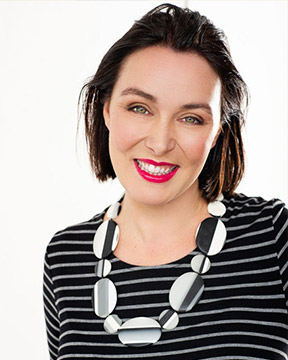 Vicky Jacobs has developed a reputation for her ability to get anyone singing at their best - from Australia's top music theatre stars to the most nervous new singers.

In 2021, Vicky is working as Assistant Musical Director on Moulin Rouge, having also filled this role on Come From Away and Beautiful: the Carole King Musical. In 2016 and 2017 she toured Australia and Japan as Deputy Musical Director for Singin' in the Rain.

For the last two years she has been thrilled to host the City of Hobart's Big Sing Bonfire where she got the crowd of 3000 all singing as one!

Vicky toured Australasia as Assistant Musical Director for the critically acclaimed Jersey Boys and has played for rehearsals and in the orchestras of some of the biggest shows to have graced the Australian stage in recent years: Wicked, Xanadu, Les Misérables, Strictly Ballroom and Hugh Jackman's Broadway to Oz to name a few.

She has been Musical Director of Motherhood the Musical, and Elegies: A Song Cycle, and been nominated for Greenroom Awards for her work on John and Jen and Thrill Me.

But most of all, Vicky loves to get people singing. Vicky is the founder and director of Glee Club, Melbourne's hippest sing-along choir with new chapters recently arriving in Hobart and Yarraville. She also hosts large-scale events, corporate choirs and workshops that guarantee to get everyone using their voice (and loving it!)

Vicky writes and arranges choral music which you can find at www.sheetmusicplus.com and The Australian Music Vault Choir Project. You might like to check out her most recent choral composition, The World Will Open Up which was written as a song of hope in 2020.

Vicky is proud to be part of the team that developed the Number 1 Vocal Warm Up app for smartphone, Warm Me Up which you can download on iPhone or Android. 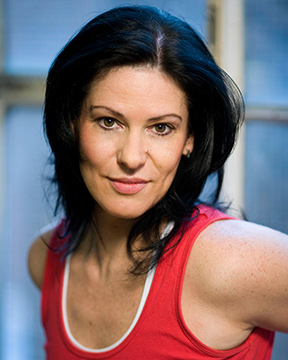 Dana’s career began at age of 9, in the musical Gypsy at Her Majesty’s Theatre Melbourne.

Dana then studied at the Victorian College of Arts, before performing with Victorian State Opera and the Australian Contemporary Dance Company.

Dana then moved to London, performing, and choreographing in the UK, Europe, Scandinavia, and Japan, for over a decade.

Dana returned to Australia as Resident Choreographer for the Australian productions of Showboat, receiving a Green Room Nomination, We Will Rock You, and The Producers, before choreographing 2,000 dancers and puppeteers in Citrawarna Colours of Malaysia Festival in Kuala Lumpur. Dana then choreographed 2 productions for The Victorian Opera, and Everybody Loves Rhonda for the opening of The Adelaide Cabaret Festival.

Dana’s Musical Theatre credits include Respect, staring Rhonda Burchmore, and 12 productions for The Production Company, including Anything Goes, Kiss Me Kate, Thoroughly Modern Millie, Little Me, Follies, Dirty Rotten Scoundrels, Grey Gardens, Showboat, Nice Work If You Can Get It, Curtains, A Gentleman’s Guide to Love and Murder and Ragtime. In 2012 Dana choreographed the Australian premiere of Chitty Chitty Bang Bang for TML Enterprises, which toured Australia (2012 & 2013), followed by the Sydney premiere of Dirty Rotten Scoundrels at Sydney’s Theatre Royal (2013), which received glowing reviews. In 2015 Dana was invited to choreograph the new Australian musical Sexercise, which opened the Alex Theatre in St Kilda, as well as 2 productions for the Melbourne Theatre Company; Jumpy starring Marina Prior and Jane Turner, and the new Australian work Last Man Standing, written by Steve Vizard, and staring Peter Carroll. Dana was then asked in 2015/2016 to recreate Jerome Robbins original choreography for the musical Fiddler on The Roof staring Anthony Warlow. She then went on to choreograph the Australian debut of You’re A Good Man Charlie Brown.

In 2017 Dana was invited back to her old school, The Victorian College of The Arts, to choreograph the 3rd year Graduates performance of The Drowsy Chaperone and has also been invited as a guest judge for the Rob Guest Endowment on a number of occasions, amongst other projects.

Dana is the founder of the corporate entertainment company Voltage International Productions, and the Music Theatre Mentorship Program, and is in demand throughout Melbourne and Australia as a freelance choreographer for exclusive corporate functions, as well as for her dance teaching and mentoring. Dana has been invited to teach throughout Australia, as well as in the UK, America, Italy, and Germany. Dana was also inducted into the Victorian College of The Arts Hall of Fame in 2015. 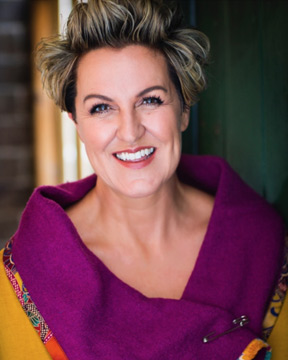 Queenie van de Zandt moves through the world entertaining, educating, and serenading the people she meets. She has the unique ability in all her work to make people feel deeply, and to awaken laughter, empathy, and awareness in equal measure.

She is one of Australia’s leading ladies of musical theatre and cabaret and considered Australia's leading teacher of audition technique for musical theatre, song performance and cabaret. Well-known for her incredible versatility as a performer she has worked extensively in musical theatre, plays, cabaret, on television and film, and as a recording artist, comedienne and writer.

Queenie’s work on television includes: The Newsreader, Five Bedrooms, Very Small Business; Winners & Losers, City Homicide, Da Kath & Kim Code; Let Loose Live; All Saints; and in theatre she has worked for companies throughout Australia including STC, QTC, The Ensemble, La Boite and the Malthouse, in plays such as: Women of Troy; Face to Face; Rabbit Hole; Absent Friends; Abigail’s Party; A Midsummer Night’s Dream; Barmaids; Caucasian Chalk Circle; Secret Bridesmaids' Business; The Vagina Monologues; The Road to the She-Devil’s Salon; Furious; and Speaking in Tongues. Queenie has also had roles in the films: Scooby Doo - The Movie, Salem’s Lot, and played the leading role of Margo in the Aussie feature film Girl Clock.

However, Queenie is still probably best known for her extensive work in musical theatre and cabaret. Queenie has played leading roles in hit musicals such as: Thoroughly Modern Millie, We Will Rock You, Funny Girl, Into the Woods, King Kong, Smoke & Mirrors, Oliver!, The Full Monty, Anything Goes, Cabaret, The Boy from Oz, Eureka – The Musical, I Love You, You’re Perfect, Now Change, Hair, and Follies. In her early career she also performed in such classic musicals as Les Misérables and The Threepenny Opera.

As a writer, Queenie has co-written two albums of original music: Amazon Womanand Other Stories and her subsequent one-woman cabaret show, Amazon Woman and Other Stories, performed at music and cabaret festivals and music venues all over Australia. Her two other critically acclaimed and award nominated cabaret shows, CABARET - In 12 Easy Steps and The Best (and Worst) of Queenie van de Zandt have toured to every major cabaret festival in Australia. In 2014 Queenie released Queenie van de Zandt - Live in Cabaret - a live recording of one of her cabaret performances and in 2017 Queenie performed her new show, BLUE: The Songs of Joni Mitchell, to sold-out houses in Brisbane, Sydney, and Melbourne. The show was subsequently nominated for the Sydney Theatre Award, the Helpmann Award and won the Glug Award for Best Cabaret and two Broadway World – Sydney Awards for Best Cabaret and Best Cabaret Performer. The show was set to tour the USA in 2020 until COVID forced Queenie to cancel the tour 4 days before getting on the plane. The show is set to continue to tour in 2021 and a US Tour is planned for 2022.

Queenie's alter-ego, Jan van de Stool, the madcap International Musical Therapist gathered a national cult following, when she appeared on Australia's Got Talent in early 2016. Her one-woman show I GET THE MUSIC IN YOU an evening with Jan van de Stool which she co-wrote with Tony Taylor, performed to packed houses in Melbourne, Canberra, Brisbane, and Adelaide and in 2006 played to sold-out houses and great critical acclaim for an extended season at the Ensemble Theatre in Sydney. The show was nominated for both the Green Room Awards and the Sydney Theatre Awards and toured twice to the Melbourne International Comedy Festival. Jan van de Stool has been seen by over 1 million Australians through her shows, her work in corporate theatre and her online presence on YouTube and social media. She is now regularly asked to host high profile charity concerts and award shows, such as the 2016 and 2017 Helpmann Awards, which were televised on Foxtel and ABC TV. Queenie continues to work with her co-writer Peter J. Casey, on pitching TV shows based on this character, as well as continuing her live performances with Jan’s new theatre show – PARTING THE RED CURTAINS – which toured to the Brisbane and Sydney Comedy Festivals in 2019.

Alongside her performance work, since 2000, Queenie has presented her master classes, workshops and courses in cabaret, song performance and audition technique for musical theatre around the country. She is writing a book about audition technique and in 2020 released a CD, with fellow vocal educator Beth Daly, called Singing & Vocal Warm Up Exercises – From Beginner to Professional. She has held teaching positions in numerous performing arts schools, has been invited to conduct master classes and seminars throughout Australia and has written musical theatre courses for several leading institutions. She has taught in the music department at NIDA and has held teaching positions in the music theatre courses at VCA and Federation University in Ballarat (formerly BAAPA).

In 2015 Queenie co-founded The Australian Musical Theatre Academy (AMTA). AMTA offers workshops, masterclasses, and courses for students of all skill levels, giving people the tools to live creative, passionate, and fulfilling lives, working with the best instructors in Australia.

Queenie brings to all her work, not only this wealth of experience but also her fine communication skills, her passion for the arts, her warm and positive nature, and her wonderful sense of humour.